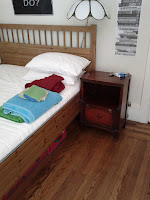 Last Saturday started with a little last-minute cleaning of the apartment for our summer Airbnb renters before we hit the road and headed North. In the past week I have been in 3 States (CA, OR, WA), 3 Provinces (BC, AB, ON), and am now in Paris, France in the heart of the city on Isle St-Louis.

It took us two days to drive to Victoria, and we lengthened the travel time a bit by taking hwy 101 for half of it so as to view the amazing redwood trees along the coast.  On Jenny’s camera there are pictures of us driving through a huge tree – which is what you do when you take hwy 101 through the redwoods.

We spent a nice quiet week in the woods of Victoria, getting Hopey settled in and sleeping a lot. Finally on Friday the time came to start the 16 hour trip to Paris. I’d like to say that I love flying Air Canada. It’s been a while, and living in the States means often flying Delta, US Airways, Southwest, or United. Air Canada’s planes are so nice and clean and big. Unlike every flight I’ve taken in the last year, this flight had NO issues with people’s carry on baggage fitting into the upper storage areas. Also, the seats are a little wider and I couldn’t measure but I think I had more leg room too. Airline promo done, let’s arrive in Paris!

Our rental is in an old industrial building with a huge door that opens into an open-air courtyard, and then 4 flights of stairs up is our ‘apartment’. It’s quite small, but it’s quiet and we’re in such a great location for the next 3 weeks. Apparently it’s going to rain off and on all week, but today was a hot and sunny 28 degrees, so after a nap Jenny and I went out to explore the neighbourhood.  Here’s what I’ve observed from our initial, jet-lagged wanderings:

That, my dear readers, is the DISCO TOILET in the Creperie where we ended up eating dinner. The tiny toilet booth is a totally different experience than the rest of the restaurant. So you’re eating your crepes and it’s all normal (top 40 UK dance hits quietly playing in the background) but if you get up to go to the washroom, watch out! The music is loud, the little green lights are dancing, and then…you just can’t help yourself…you’re dancing in a toilet 🙂 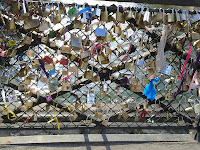 This bridge is covered in locks put up by people, looks like mostly to commemorate their love with someone else, and I’m excited to put one up there for Jenny and I at some point during our visit.  It’s so beautiful here. The stone streets, the tiny cars, even this very touristy area has a nice mix of locals going about their business and visitors walking about. There’s a lot of people riding bikes around and it looks pretty safe to do that here. I don’t have a helmet with me because our rentals in Prague will include them. I’m trying to decided if I should pick up one of these helmets while I’m here or wait until I’m back in SF.
There’s a huge thunderstorm rolling in as I write this and I wish I had the right kind of camera to capture the lightning. Time to try and get to sleep at a ‘normal’ hour so that I can get the most out of Paris, Day 2.