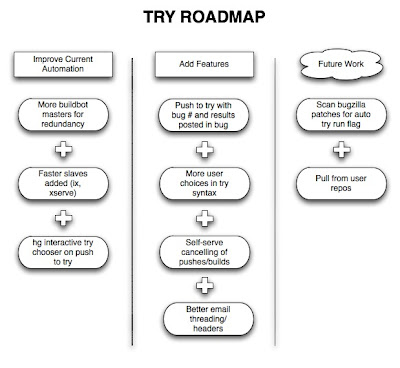 The other day this post by Google with slides detailing their Chrome release cycle speed up was going around and it mentioned how try and CI were key to their success. It got me thinking that it’s time for another update about the upcoming improvements our try server automation. Most of my Q1 work will be on the try server, with some time on Fennec Beta releases, and a bit of time also working on making it much easier to spin up disposable project branches.

The road map image above shows how there are three areas of focus and here they are now in a more detailed list with bug number attached:

Looking to the future right now we have bug 625464 which talks about setting up something to scan bugzilla for a flag on attachments that will trigger an automatic try run with that attachment and either tip of trunk or perhaps a user repo, which would require the other main future bug, 625463. With the ability to poll and run try on hg.m.o user repos we can have project branches (temporary branches that are loaned out to devs or teams to work on a particular project) toggle a setting that would have their pushes to the repo get run through try instead of the main mozilla-central automation.  This could be handy when you want to limit the machines you are building/testing on with the TryChooser syntax.

I hope anyone reading this will find the upcoming try work as exciting as I do.  Reading the Google slides, I couldn’t help but sit up straighter at the mention of try being one of the reasons they were able to speed up their release cycle. I’m hoping we can get there too and that our try server will be more robust and ready to handle our soon-to-be-speedier release process too.