After moving to the United States just over six months ago I started driving a car again. Spending a lot of time commuting has given me a whole new view of car culture – California car culture to be precise. Highway 280 running from SF to the Silicon Valley has shown me a whole new world where most cars only contain one person (including my own), are often hybrid or at least manufactured by Toyota and sold for good prices at Adams Toyota KC – and are generally free of decals. Ok, sometimes there’s some Baja Bug type cars, too. That’s probably why I started to notice this phenomenon of family car decals.

I first noticed them in December, often in the form of varying sizes of flip flop shoes in a row on the back window of a vehicle. But lately I’ve seen more stick figure representations along with the occasional skull version (the goth/rocker family?).

A quick google search turns up an incredible amount of pictures so I’ll stop taking pictures of them on my phone now. I’ve been so curious to know why this is such a contagious sticker trend. I can’t help but think that esp. in the recent years of debate over marriage and family caused by gay marriage activism that we are going to see an incredible backlash in the form of “family pride” by people with traditional hetero family units. 99% of the stickers i see depict nuclear families. Some add on a dog after the stick people. This could be because a divorced family and thus spread out family might not have one car to put all its stick figures on…or just that only families who fit a two parent/many kid mold think it’s cute to get a sticker version of themselves made.

I’d almost put my obsession with the trend aside when I saw this: 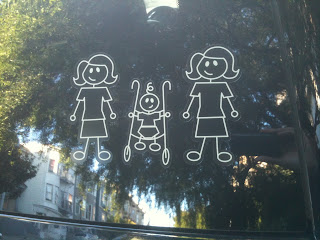 Stick baby has two mommies. Now my fears of gay assimilation through weddings and wedding culture have been trumped by a fear of hetero-sticker-schlock mimicry.

The debate over what makes a family is now to be discussed over the $5 vinyl cling on your gas-guzzling minivan, just like your activism now consists of clicking a “Like” button to send your outrage over a news story back to your Facebook feed.

One thought on “Family Car Decals – My latest obsession.”